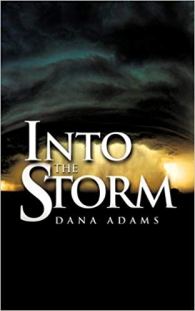 The generator’s going off in 15 min. as we are rationing the little bit of gas we have left. We’ve heard that trucks are bringing gas in from Port-au-Prince today. We hope that me may be able to get some before we run out. All our workers showed up this morning and said the streets are calm. That is wonderful news! We left the compound yesterday to go to church for the first time in around 10 days. What a service! The Haitian people continue to amaze me. Church was packed and the worship was sweet. Much prayer was offered for this country. Please continue to pray for Haiti!

I am posting a revised version of an article I wrote some time back that is definitely appropriate for this season. I hope it will bless you as well, particularly for trials you may be going through. God is able!

Weathering the Storm
I (Dana) was watching the Golden State Warriors playing the Cleveland Cavaliers one night. The Warriors were over 20 points behind and the idea of them pulling back up to equalize the score with the Cavaliers looked pretty dim. The Cavaliers caused one upset after another and their leader, Lebron James, edged them closer and closer to solidifying their win. Stealing the ball from one of their opponents and racing to the other end of the court to score time and time again just proved to dampen the Warriors’ spirits even more. The impenetrable defense the Cleveland team provided brought further intimidation. It also didn’t help that the two teams were playing on the Cavaliers’ home court with all their screaming fans in their corner. Nothing they did seemed to shake the confidence of the Cavaliers’ ability to stay ahead, and every goal Lebron’s team scored just tightened the noose a little more.
But, then an interesting thing happened. The Warriors’ coach called a ”time out.” I watched as the camera panned over the weary Warriors. Then, I heard the coach’s voice loud and clear. Here’s what I heard him say in so many words.
You’re going to be ok. Don’t fix your eyes on the scoreboard. You are all winners. You just have to weather the storm. Now, get out there and win this game!
Just … weather the storm. What incredible advice! It was just what the team needed because they had every bit of confidence in their coach. And, that’s just what they did. When they returned to the court, they looked like the same team that took a timeout. But slowly and surely it became obvious that, with their renewed confidence and persistence, they were taking back the game. Little by little they began to score. With amazing teamwork, they began to come up with incredible plays that baffled their opponents’ defense team. As the scoreboard slowly, but steadily, added 2 points here and 3 points there, the confidence of the Warriors seemed almost palpable. The screaming fans didn’t seem to phase them anymore and, to make a long story short, they pulled past the Cavaliers and won the game. They would go on to take the championship that year as well.
You see, the Warriors’ coach (Steve Kerr) had played for the Chicago Bulls. How many times had the Bulls trailed so far behind in what looked like an impossible situation? Yet, time and time again, the Chicago team would begin to synchronize perfectly as one, then eventually pull past their opponents and win the game. They kept winning – even multiple championships. Steve Kerr was already a winner and the team he mentored knew it. They had every bit of confidence in whatever the coach told them.
We also have one on the sidelines who’s coaching and cheering us on as well. The neat part is this…He has not only weathered the storm, but is the Master of it as well. Beloved, retreat to your quiet place and listen for His voice. Here’s what you’ll hear Him say …
You’re going to be ok. Don’t fix your eyes on the scoreboard. You are winners. You just have to weather the storm. Now, get out there and win this game!
Into the Storm
I also wrote a book in 2011 called Into the Storm. It is available at amazon.com and tells of another ferocious storm which we weathered. If you haven’t read it yet, get a copy and get encouraged!