Every time I have begun to write a post, something has happened to change our plans. Prit and John have already returned to Haiti. They were due to fly out of Fayetteville Sunday afternoon. Thirty minutes before we were to take them to the airport, they received a phone call informing them that the flight crew was backed up and there would be no flights that day. Flights were available from Raleigh, however. After a quick discussion, it was decided that we would run them up to Raleigh to make the 4:00 flight to Charlotte. From there they could fly to Miami. This morning they landed in Cap-Haitian bright and early greeted by the warm sunshine and many happy fellow workers.

I was sad to learn that our dog, Max, died in our absence. He was very old and had belonged to the missionaries that lived in our home previously. We often joked about how Max was all knowing and so old that he was there to greet Christopher Columbus when he first landed on the island. Since Max rarely barked, we concluded that he thought it was beneath his dignity to waste his precious energy upon such a frivolous activity. His commanding presence would scare away any thief anyway. There were many, many tales woven about Max that endeared us to our furry friend all the more. We’ll miss you Max! 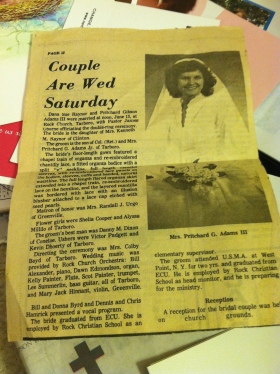 Saturday night while Prit and John were packing, I decided to get a head start on cleaning out drawers that have long been overrun with stuff. The discarding of one item and the saving of another soon turned into a walk down Memory Lane. Do you recognize the bride in the picture? Yes, that’s me! It seems like a lifetime ago. So much has happened between then and now. Memories flooded my mind as I came across pictures of our children in their various stages of growing up. I reread letters from faithful friends, some who have now passed on, that warmed my heart. A schedule which marked the events of Prit’s hospital stay in Canada held details of his precarious state at that time. Reading it again made me ever so grateful that that ordeal was now over.

4 thoughts on “Messy Plans, Max, and Me”