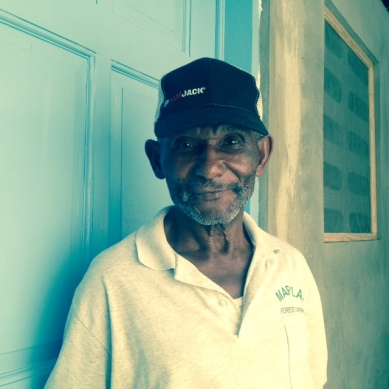 Thanks to the gift of some very generous friends, Colas finally has a place to lay his head. Jacques Kercius Colas has lived with us for around twenty-three years. When we moved to Cap-Haitian and started our main church, ”Cola,” as everyone knows him, started attending the early morning services. He gave his life to the Lord during that time. Unfortunately, Cola was very sick with tuberculosis. In the early morning prayer meetings, he would be found lying on the back bench and was too weak to even sit up. Our church members would gather around him, pray and encourage him to believe God for a complete miracle. Though all seemed lost, Cola actually started to get better and fully recovered. Ever since then, he has been working for us.

Cola is almost like a permanent fixture in our home. If you’re a fan of Downton Abbey, Cola would be our ”Mr. Carson.” He has worked for us all these years doing everything from maintaining our generator to shopping for us in the marché. In 2006, Prit, myself and Cola were kidnapped by a gang. The men who abducted us were afraid that Cola might recognize them. Therefore, they placed a pillow case over his head and forced him to bend over. He was so frightened that he began to vomit into the pillowcase. Later, the gang allowed me (Dana) to drive back to Cap-Haitian in the pitch dark with a very disoriented Cola. So, as you can see, we and Cola have a long history.

This past year, due to some very unfortunate circumstances, Cola found himself without a home. Our hearts ached for someone who had been so faithful all these years. We offered him the sofa in our den until we could figure out a solution for him to have his own place. Fortunately, some Rehoboth supporters came to the rescue. Because of their generosity, Cola is now sleeping in his own room on our property and is overjoyed, and so are we!

Thank you again for helping to lift heavy burdens from other people’s shoulders who are less fortunate than you. We have the best supporters in the world.

In our last post, we mentioned some projects that need to be done for our Bible institute. Great news! Someone has already  purchased the water cooler. How about you? Would you send a $25, $50, or a $100 offering to help us get these needs taken care of?  Our students will thank you! Prit and I have already invested in getting the tables built so our students will no longer have to sit at desks too small for them. Check out our last post to see what remains. https://rehobothhaiti.com/2016/02/05/bible-school-projects/

1 thought on “A Room For Colas”