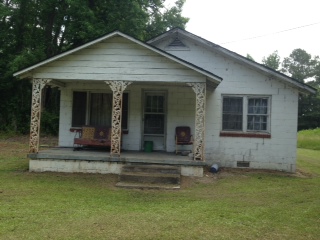 Gertie’s house stands abandoned today on Highway 701, just five miles outside of Clinton, North Carolina. As I stood in front of it, my mind traveled back over fifty-two years to when I was only five years old and living on Kimbrough Road. We would move the next year from Clinton to the countryside and life, as I knew it, would change. I would start my first year of school and I’d leave behind Gertie.

My mother was a teacher. While she taught school, Gertie would watch me, clean house, and have supper waiting when Mama got home. I’ll never forget the morning that Mama had to leave for school and I begged her not to leave. I cried and cried, all the while clinging to her skirt, but of course, she had to go. As I sat on my bed sobbing, Gertie brought me some grapes. Soothing me with comforting words, I finally forgot my sorrow and skipped off to play. The only other memory I have is of her cooking in the kitchen, yet Gertie was a mainstay in my life during my formative years. I wish I could have told her “Goodbye.” Maybe I did and just don’t remember it. A five-year-old only makes so many memories.

My mother told me a story about Gertie that I have often repeated over the years. Mama had five children. I was the caboose. My father had become mentally ill after his service in the Army Air Corps during World War Two and was only at home off and on, not providing a strong presence in the home. Truth be told, it was Mama who raised us and provided for our family on a teacher’s meager salary. Thanks to the kindness of friends who let her buy groceries and other needs on credit, somehow Mama managed to provide for us. Life was very hard for her.

One day, my mom was tired and frustrated at having to be the sole provider for my brothers, sisters, and me. Worn thin, she poured out her complaints to Gertie. I have a feeling this was just one of many times. “I don’t know how I’m going to do it, Gertie. I have all these children to take care of and I just don’t know how I can make ends meet. How am I going to pay all these bills?” Gertie replied, “Miz Raynor, God’ll make a way where there AIN’T no way!” I guess there was an UMPH! behind Gertie’s answer for my mother to have repeated that story to me so many times. It seemed to be the fuel she had needed at the time to keep the Raynor-mobile moving.

While in Clinton this week visiting my sister, my thoughts wandered back toward Highway 701 where Gertie used to live and then to Kimbrough Road. I began to wonder if any of Gertie’s relatives still lived around Clinton and whether they’d like to hear the advice Gertie gave to my mom. There were only four names in the phone book with the last name of Grice. I called two of the names and no one picked up. After calling the third number, BINGO! Gertie’s daughter answered. After wading through a maze of confusion as to who this stranger was who was calling her out of the blue, she finally realized who I was. She even remembered our family. I told her that I was going to write an article about Gertie and wanted her to be able to read it. She didn’t really want her mother’s picture on the Internet so, of course, I respected her wishes. But she said she didn’t mind if I took a picture of that white brick house that has come to my mind time and time again over the years.

Throughout our thirty-one years in Haiti, time and time again, we have faced impossible situations. What Gertie knew we have also come to know. Truly, “God will make a way where there AIN’T no way.”

6 thoughts on “What Gertie Knew”